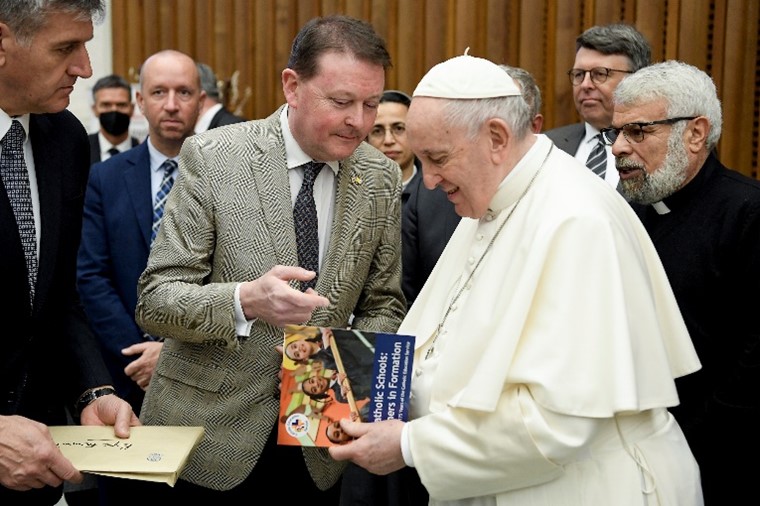 Marking the 175th anniversary of the founding of the Catholic Education Service (CES), Pope Francis has gratefully received a copy of the CES’s latest publication Catholic Schools: Partners in Formation.

The booklet – which includes an overview of Catholic schools in England and Wales – reflects on the distinctive nature of Catholic schools and on why the Church provides them. It was presented to the Holy Father in the Vatican by CES Director Paul Barber, in his capacity as President of L’Office International Enseignement Catholique (OIEC). The booklet has already received warm welcome by UK Parliamentarians earlier in the year, at an event which saw the guest of honour, Education Secretary the Rt Hon Nadhim Zahawi, recognise the tremendous value of Catholic education across the country.

The chapters are illustrated with case studies of schools, teachers, parents, and alumni, which offer compelling testimonials of the Catholic ethos in action. In the famous words of Pope Francis, which the case studies testify to, “educating is an act of love; it is like giving life”.

Commenting, CES Director Paul Barber said that “It was an honour to share the milestone of the 175th anniversary of the CES with the Holy Father, who understands the crucial presence and distinctive nature of Catholic schools. The testimonials contained within this booklet offer a small glimpse into the many good fruits of the Catholic ethos in schools in England and Wales, which we hope he will enjoy reading.”

The Catholic Church is currently the second-largest provider of education in England and Wales, with 2,200 schools, 850,000 pupils and 50,000 members of staff, and four universities. Educating more than a quarter of a million non-Catholics and with a pupil population significantly more ethnically and socially diverse than the national average, Catholic schools maintain their strong track record of being at the service of all.

The booklet concludes with an optimistic outlook for Catholic schools in England and Wales, for their next 175 years of forming well-rounded young people and contributing the highest standard of virtues-based education to the common good.

Read 1145 times Last modified on Wednesday, 25 May 2022 13:30
Tweet
More in this category: « Statement on the incident at the John Fisher School, Purley Statement on the Government White Paper »
back to top